Hi there, and thank you for stopping by. Today sees Stamp Addicts back on tv and these are some of my samples I’ve made for the show. You’ll also find these on Instagram @d_e_crafts so I hope you’ll follow my creativity and leave a message!

The chrysanthemum skull rubber stamp is a deeply etched and as you’ll see it’s very detailed. I’ve used distress inks here to watercolour this image and have added a second layer which is raised as you’ll see below.

Another sample with the porcelain background is this one:

The other stamp for this show is a fuchsia and this one also features another background “papyrus”. For this image I’ve cut several layers of the flower and decoupaged it up to give it some depth.

The last card below also uses the papyrus background as well as some keys which are also Stamp Addicts rubber stamps. Instead of stamping the papyrus as one whole background this time I’ve inked a section and used that section to fill the card from. This gives a more random pattern.

I hope you liked the stamps and the samples. Let me know if you have any questions and I’m happy to let you know what I’ve used and answer any questions.

Thanks for stopping by!

Hi everyone. Thanks for stopping by. This is a little gift set I made for a friend’s birthday as I know she appreciates the work that goes into them.

I made the box and a band to hold everything together. The box was decorated with a Tim Holtz stencil. Just building up the layers and colours. So inside this box are the 6 cards/notelets below which I’ve showcased some JMC stamps.

Alongside these cards I didn’t want to leave the envelopes blank so I also decorated those as well!

The recipient was thrilled with her gift so it made the work worthwhile.

I hope that you feel inspired and it would be lovely to read you comments. Tell me how you would feel if you received this as a gift.

Hi there, I wanted to write a blog post to show you some of the latest stamps I was working with from Stamp Addicts. These were featured in their latest tv show on 29th March 2022 on Create and Craft.

This first card is using “gothic border” which I’ve placed back to back as a focal point down the card. It’s stamped with 3 distress oxide inks to give some interest and variation in colour so that it wasn’t so ‘flat’.

Again using the gothic border we have a simply edged card that would work for a wedding or an anniversary. simple but classy.

Another way of using the border allows you to create a square and looks like it could be corners rather than a border.

Moving on to the Skully lovers I’ve also used the gothic border in the background building up a stamped backdrop with distress oxide inks. I’ve then fussy cut the skulls and flowers as the facial image and raised and shaped this on silicone glue.

And on the inner panel I’ve stamped the border randomly to coordinate.

The image below is a little more dark and looks like it’s got a lace touch to the edges by using the top of the gothic border.

Last but not least, a card using the skully lovers coloured with pencils, mounted onto a black and white rose background put though a heart embossing folder and tinted with red ink.

Let me know what you think and hopefully this has given you some inspiration.

Hi everyone. Things seem to be getting slightly warmer which is a bonus.

On to the DT challenge and the sponsor for trimmies CRAFT challenge #629 is Star Stampz. The theme this week is “Christmas”. Each week we invite you to join us at Trimmies Craft Challenge going with the theme.

For this one coloured the image with pencils,, and cut the image out from the A4 sheet it was printed on. I edged the rectangle with some creative expressions stamps which are a distressed snowflake border using Weathered Wood distress oxide.

I hope that you feel inspired and it would be lovely to read you comments. Are you making any Christmas cards in March?

The sponsor for this challenge is Twinkle Lane Designs. Each week we invite you to join us at the Through the craft room door blog, the theme is always anything goes!

The elephant has been coloured with an HB pencil and a paper stub and a pink coloured pencil. I die cut around the elephant and cut a mat in black so that it would stand out from the pink glittery background. Another mat and layer were also cut for the sentiment. As elephants are not supposed to forget I thought this would be a good sentiment to put on this card.

Here is a summary of the materials:

As always, I hope that you like the card. It’s lovely to see that you’ve stopped by to leave a comment. Thank you.

So now that we’ve been back to work for a couple of weeks it’s like the Christmas break never happened. Do you ever feel like that? 😞

The sponsor for the CRAFT challenge #624 is Trimgym, who is the coordinator for our CRAFT challenge group and the theme is Anything Goes (ATG). Each week we invite you to join us at Trimmies Craft Challenge going with the theme.

For this card I stamped the bead curtain onto a spare piece of card to create a topper which I’ve also edged with the ink to give more of a focus to that panel.

Onto another piece of card I printed the digital image of the seahorse, fussy cut it and coloured it with the listed Chameleon pens. I wanted subtle colours and I think that these work well.

To finish off I also added the sentiment “Happy Birthday”, but this was taken from a stamp that actually has a second line which I’ve masked so that this didn’t get inked just leaving the section I wanted to use.

Thank you for stopping by, please leave a comment. X

The sponsor for the CRAFT challenge #622 is Colour of Love and the theme is Christmas. Each week we invite you to join us at Trimmies Craft Challenge going with the theme.

The image has been coloured with Chameleon pens. With the tree I wanted some variation in colour so I’ve added glitter to every other layer. In each of the 2 corners I added a snowflake corner stamp and some word stamps to help frame the image. Then I inked with the Iced Spruce and stamped with the snowflake stamp on the base card.

Thank you for stopping by, please leave a comment. X

The sponsor for the CRAFT challenge #619 is JMC Designs and the theme is winter. Each week we invite you to join us at Trimmies Craft Challenge going with the theme.

So here’s a summary of the materials:

I coloured my sweet little penguin “Peggy”with Chameleon pens and cut her out on my scan n cut machine.

I then took the paper sheet from a The Paper Tree paper pad and cut it and then fussy cut around the items at the bottom of the sheet so that it could overlaid.

The stars were a little bit bold so I chose to cover the top part of the paper with a thin coat of white acrylic to knock back the colour slightly.

After layering up the papers I stamped some snowflakes in Iced Spruce Distress Oxide and used this to also ink around the edge before mounting it onto a base card. I added the penguin, a sentiment and a snowflake.

Thank you for stopping by. Please leave a comment.

The sponsor for this challenge is Sweet n Sassy and the theme is Christmas – non traditional colours. Each week we invite you to join us at Trimmies Craft Challenge going with the theme.

The cute little mouse snuggled up into the hat was coloured with Chameleon pens and then given a bit of glitz and glam by adding glimmer powder. I cut the image out on my scan n cut and then worked on the background. I took my card blank and stamped in a versamark clear and added pink embossing powder. I then added some more glimmer dust into the winter themed background border stamp.

As always it’s lovely to see that you’ve stopped by to leave a comment. Thank you.

Welcome to this weeks challenge at Trimmies Craft Challenge the sponsor for this challenge is QKR Stampede.

This cute fella has been coloured with pencil crayons and a graphite pencil. I drew a doodle border around him to give some separation from the background stamp. The background stamp was stamped in versafine Clair ink. A couple of words were then highlighted by adding some distress ink onto them in red as well as the stars being coloured yellow. To finish off I mounted this onto black and red, then added it to a base card.

I’m looking forward to seeing your entries, so let’s see what you can do! 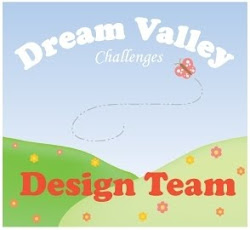